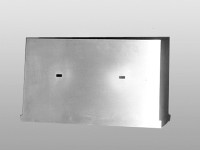 Geologging is an exploration technique used mainly in the oil and gas industries. It is also known as wire line logging and borehole logging. A gamma ray source is lowered into a borehole and the radiation penetrates the rock strata. This data can then be analyzed to determine whether deposits of gas or oil are present. Tungsten alloy is used to shield the radioactive source and acts as a collimator for the gamma beam.

Radiation is used to inspect welds and to detect cracks in pipelines. A gamma source is mounted on a remote-controlled wheeled trolley (sometimes called a "pig") and travels inside the length of the pipe. Tungsten collimator is used to direct the radiation onto the target, whilst the radioactive source is housed inside tungsten shielding.

Industrial radiography uses gamma radiation to detect structural faults in materials such as metal and concrete. As with pipeline inspection, the equipment uses tungsten shield, coupled with a tungsten collimator. Thickness, density and level gauging radioactive sources are used in industrial processes to measure thickness, density or levels of materials during production e.g. paper, plastic film, steel sheet or surface coatings. The material passes between a radioactive source, which is housed in tungsten alloy, and a detector. The strength of the detector signal is used to measure the thickness, density or level of the material.

The penetrating power of radiation has also been put to use in the fight against terrorism. The Homeland Security industry has designed scanners that use gamma radiation to detect objects in cargo containers or airline baggage. The radioactive sources are very strong and require tungsten shielding to protect security staff and members of the public from the radiation. A tungsten collimator is also required to direct the gamma radiation onto its target.